My parents, who so generously got me the Yashica 635, arrived at my house last week with two more vintage beauties for me. This Konica C35 was purchased at the same time as my Yashica.

I know next to nothing about this camera but am excited to play around with it. The other camera came from my Mom’s cedar chest. It was her camera back in the day….a Polaroid Land Camera Automatic 103 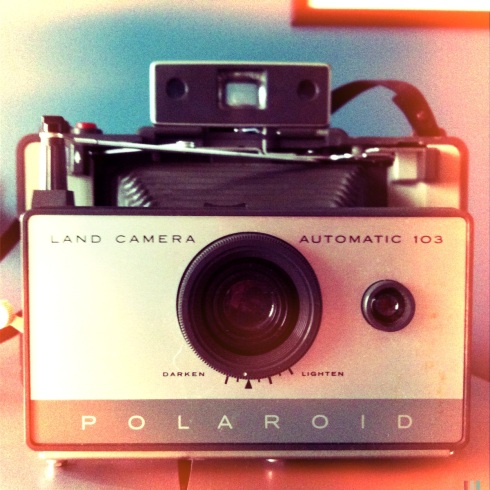 This one I am familiar with. It’s the relative of another Polaroid Land Camera that I own, the 220, and just like my 220 (which I affectionately refer to as Aunt Bertha’s camera because it came with EVERYTHING in the case, including a little lace hankie, and smelled like the top of a moth-ball-filled closet), it included the case, manual and a flash unit. Once I get a battery for it I’m going to give it a try. I’m hoping the roller functions better than the 220 so I don’t get gluey rollers half way through my film pack. What a pain it is to clean.

I’m still waiting for my first Yashica roll to come back from the developers. I took it out last week on a foggy morning as we took the kids and dog for a walk in the woods. I’m hoping for some moody, misty shots. Until then, I will share some iPhone photos I took while at the Philadelphia Museum of Art. 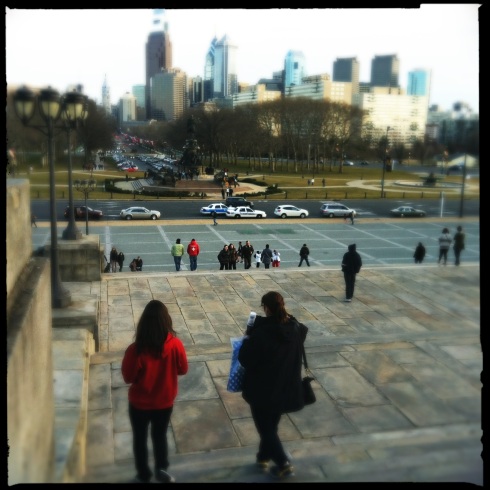 Curators are masters of using light to highlight the best parts of an exhibit. Whether the lighting is very low, casting gorgeous shadows on the walls, or warm and inviting, everything is beautiful and begging to be captured by an intrepid photographer.  Whenever I visit a museum I treat it as a workshop in lighting. I push myself and try new techniques to see how my camera best responds. This first shot was taken through my Holga Lens Turret’s blue filter. 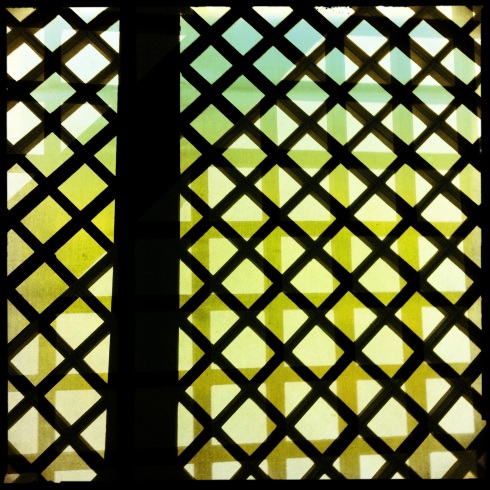 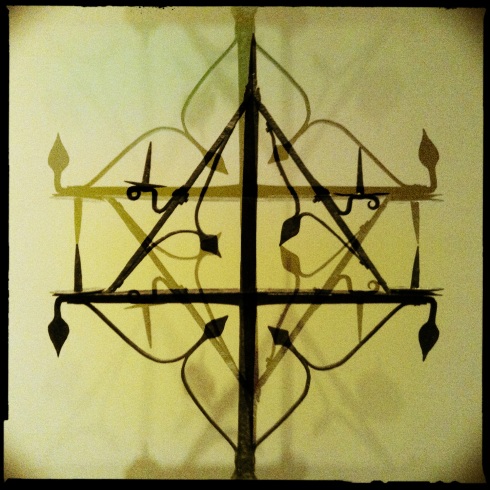 This last shot was in the cafeteria. I used the Salvadore 84 lens on all the pictures that look doubly exposed. 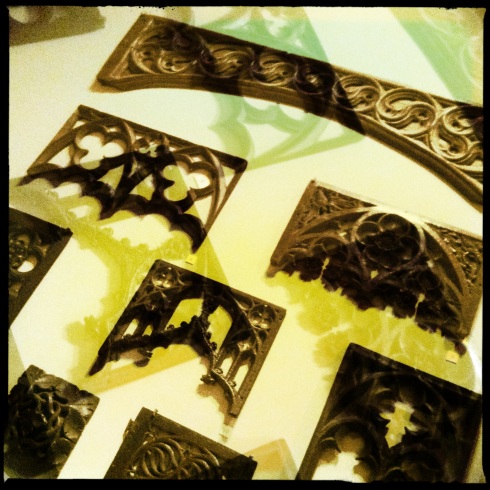 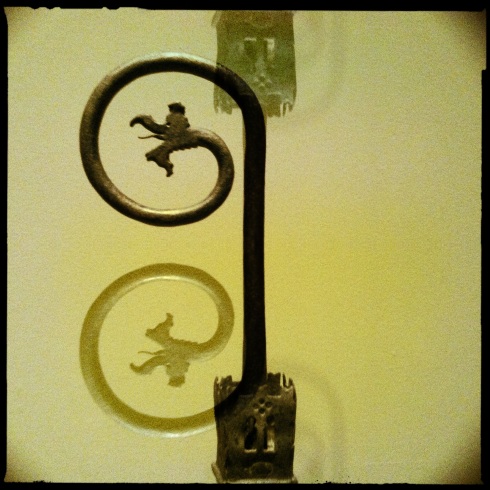 Museums are also great places to test out your camera’s macro abilities. The iPhone is phenomenal at close up shots and even better with the Holga Lens Turret’s macro lens.

The rest of these pictures are taken without the macro lens. 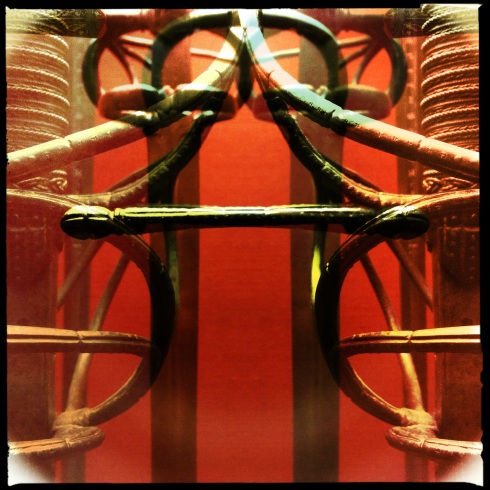 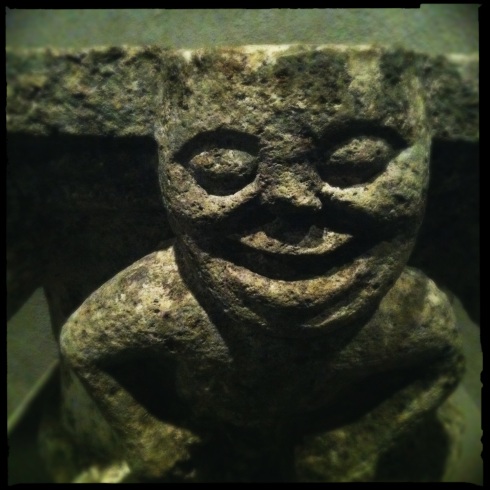 I love St. Patrick’s Day. It’s the only day of the year devoted almost entirely to drinking. I’m not a lush, but I do love good beer and today, everyone else pretends they like it, too. It’s like National Beer Day. Another reason I’m celebrating today is that my parents are visiting and they’re bringing me the spoils from a few flea market trips. They wintered in Ft. Meyers, FL and are bringing me a Yashica 635 and Konica 35mm SLR. I’m SO excited to try the Yashica and will probably load it up with film and take pictures of the daffodils, clover and weeds that are now populating my front yard.

Here are some joyous, celebratory pictures that I took in January with my Fuji Natura Classica. One of my BFF’s, Loretta, and her husband Brad watched an important American Football playoff game at our house and our team won!

Also on that roll of Fuji 800 speed film were pictures taken on a recent trip to Washington DC. We visited the International Spy Museum and ate in Chinatown. 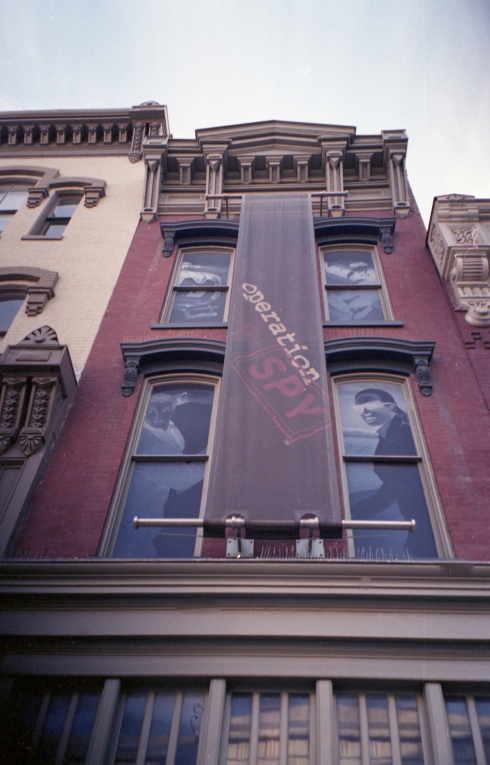 There was a sign stating “No Photography Allowed” at the entrance of the museum, but since it was one of the first times I had my Natura Classica with me, I decided to flaunt their rules. I didn’t get busted….hehehehe. 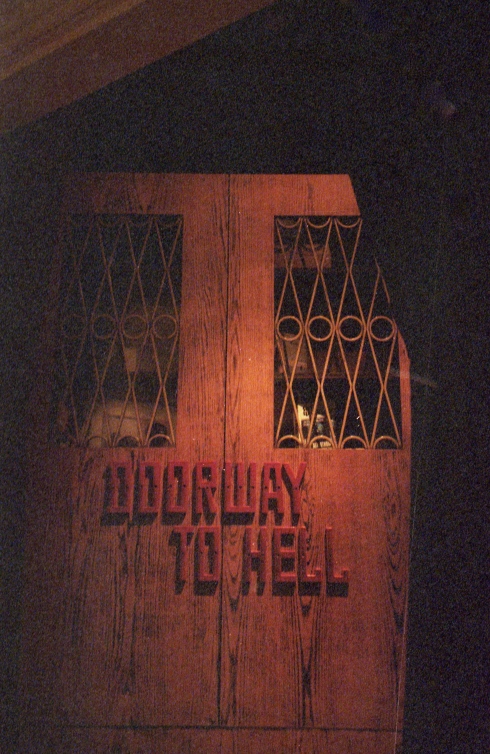 They’re not the best pictures (clearly, I need more practice taking pictures covertly) but I had fun doing it. Here’s some better shots of Chinatown. 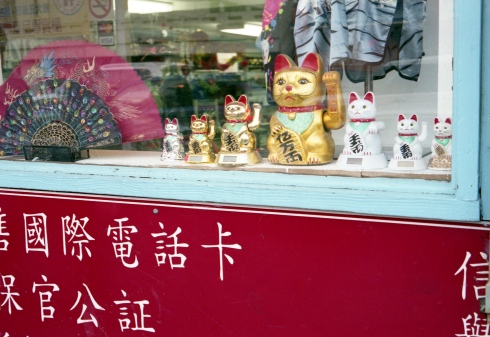 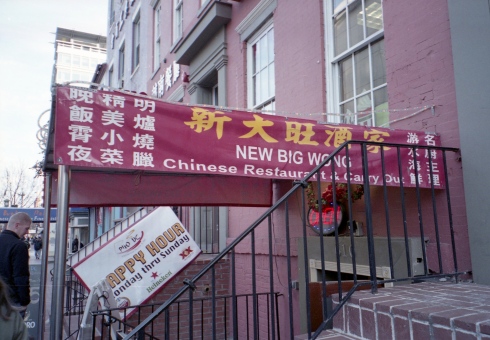 We didn’t eat at this place, but with a name like New Big Wong, we might have try it

This is where we ate. You could watch them make noodles amongst the duck carcasses. Pretty cool. 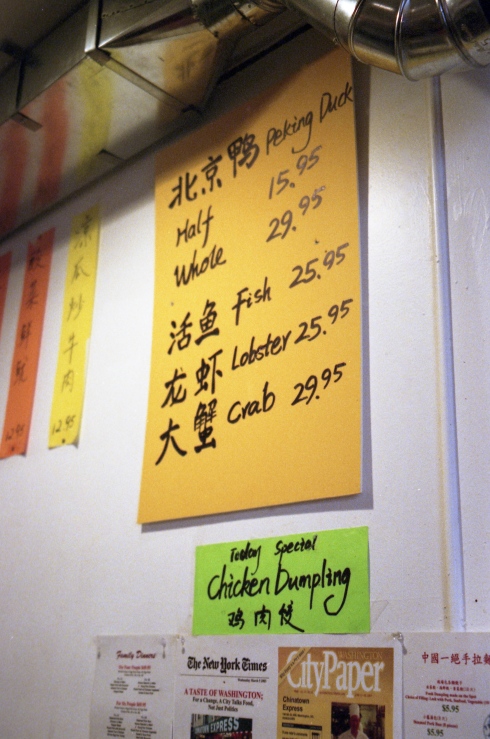 More DC, but not in Chinatown 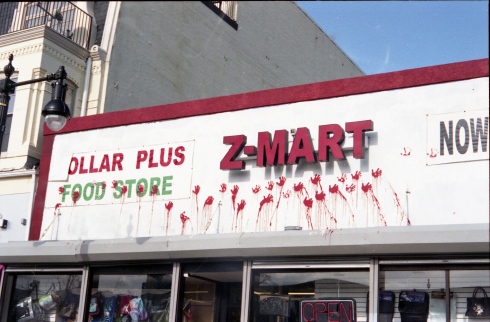 This would’ve been a great shot if it hadn’t been for that pesky camera strap.

Tonight we’ll be going out to celebrate and hear some great local music. I’ll be documenting it all on my iPhone and I hope to have pictures that I can share with you next week. I’m hoping not to drop my iPhone in beer tonight. Wish me luck with that!

The first roll of 1600 iso color film that I ran through my Fuji Natura Classica has returned and I must say, it has given me mixed results. The camera performed fabulously in low light conditions with faster film, but there were some pictures that left me scratching my head.

For example, a few of the photos in natural light were blurry. I’ve heard of this phenomenon with the Natura Classica, but this is the first time I’ve personally experienced it. These pictures are from a trip to Twin Lakes Brewing Co. in Greenville, DE. I HIGHLY recommend a trip there if you’re in the area. The brewer, Sam Hobbs, personally sits down and weaves a tale of history, brewing basics and the environmentally sound practices that his brewery adheres to. The brewery is on a farm that has been in Sam’s family for seven generations and has played a large part in the history of northern Delaware. 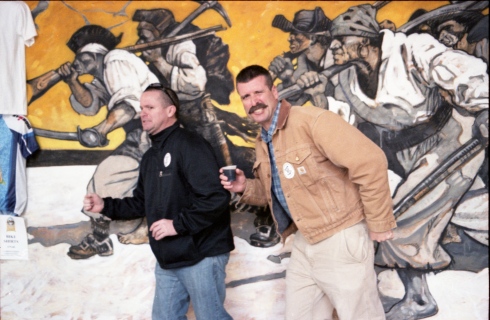 See? Just they’re just this side of out of focus. Not enough to make them horrible pictures, but disappointing nonetheless. There was a pleasant surprise on this roll. I posed with the “Stanley Cup of Beer Growlers” and had Sam take a shot of it with my iPhone while Jake took the shot with the Fuji. 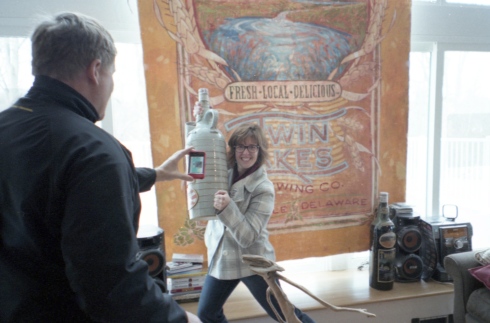 Wow! The Natura Classica did a MUCH better job! Here are a couple more pictures from our brewery experience. 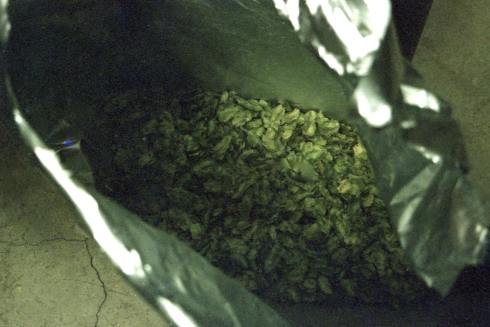 That’s a giant bag of hops.

There were also pictures on this roll of our trip to the Philadelphia Art Museum. I had lots of opportunity to play with light and shapes. First, I have to show you the picture that almost got me kicked out of the museum. I snapped this shot of Van Gogh’s “Sunflowers” and a security guard TOTALLY busted me, telling me to put away the camera. No pictures allowed. I figured it was no FLASH photography, but I was wrong. 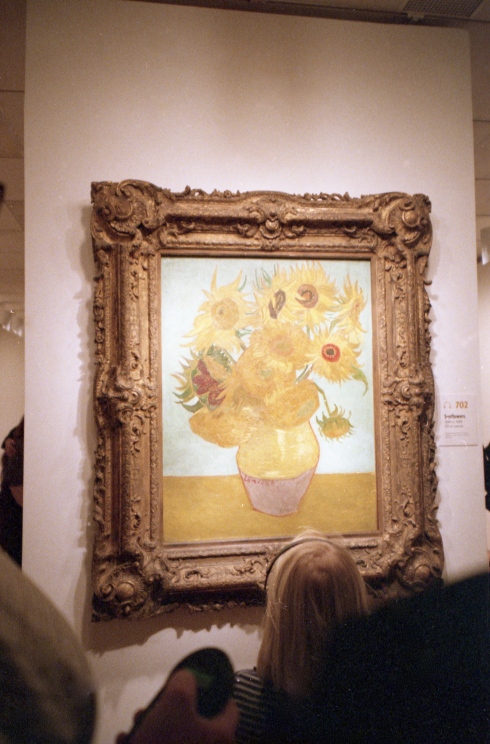 There’s lots of graininess in this picture, but I don’t think it detracts from the subject. 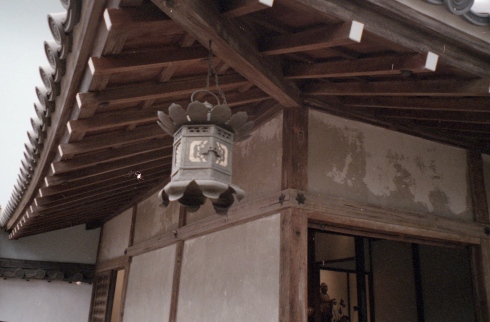 This last shot is one of my favorites

There was a beautiful display in a dimly lit room of some iron work. The play between the hard shapes and their shadows was interesting. 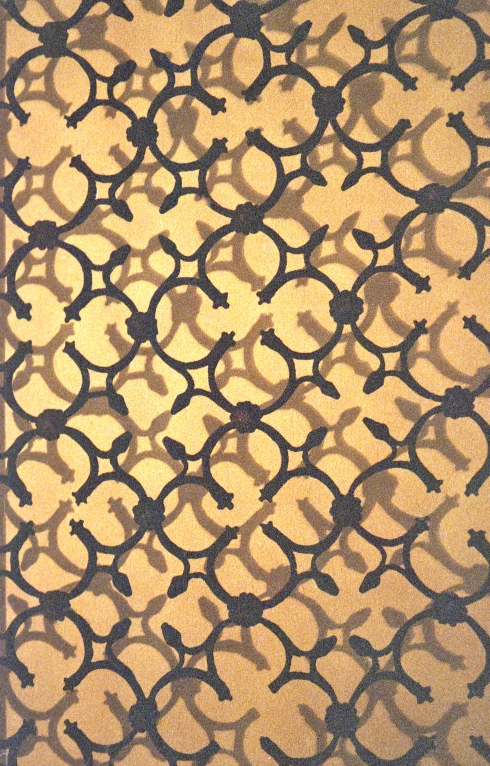 I think this is the point at which the Natura might have been on the outer edges of its range. While I really like these pictures, they would’ve looked better if they weren’t so grainy.

Here’s another fun comparison shot between the iPhone

And the Natura Classica

The 1600 film gives the second picture a much different feel and character than the digital Hipstamatic shot.

Lastly, we had dinner at Garces Market and I took the opportunity to snap some pictures. 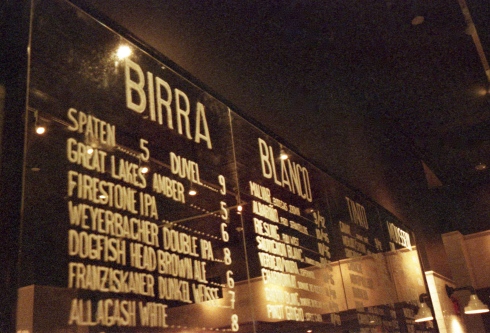 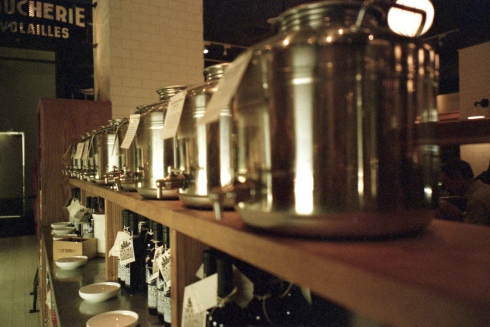 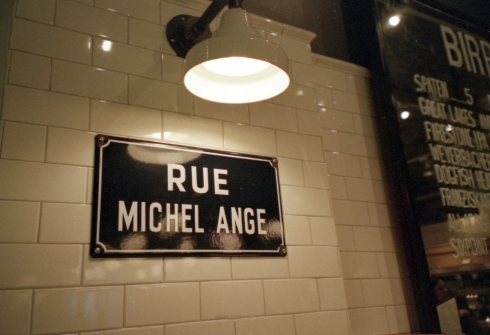 Again, for comparison, here’s an iPhone shot at the restaurant.

All in all, I’m quite pleased with this roll of 1600 but once again, I’m reminded of the limits of film when it comes to dim light. I still love my Natura Classica and will continue using it on a regular basis, especially at places like museums and restaurants. Sometimes the graininess of the fast film adds character, sometimes it just detracts. The experimenting will continue.

What I Learned From a Bad Roll of Film

Being less-than-thrilled by the results of a film photo shoot is a bummer, but that’s the life of an analogue photographer. When this happens to me I always try to find out a) what went wrong and b) what went right. The results on this roll from my Canon AT-1 are a prime example.

My camera was loaded with Fuji Chrome, iso 100 slide film and had the 28-80mm zoom lens attached. The first few shots of this roll were taken indoors. I tried to do some light painting using Christmas tree lights. I also took a macro-type shot of an orchid. 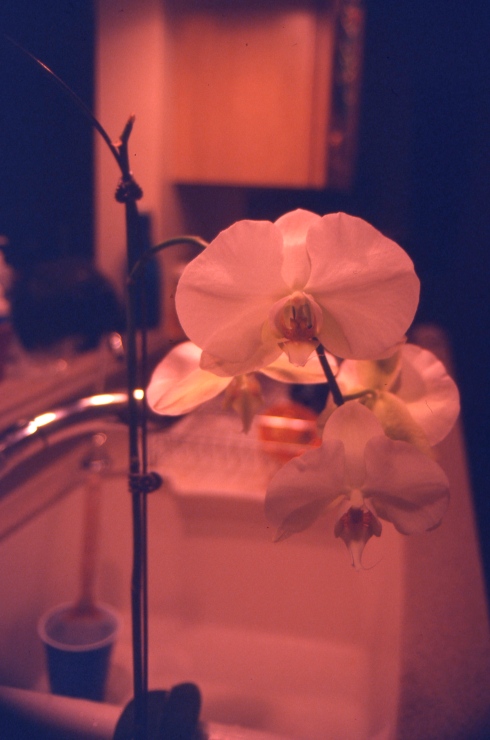 Both unexciting shots, but they help to tell this story. Next, we went for a walk on the beach. It was a beautiful and unseasonably warm January afternoon. Also on this expedition I took along my Fuji Natura Classica and shot some of the pictures in this blog post. When I didn’t have to worry about light metering with the Fuji, my results were really nice. With my Canon, it was a different story.

I completely forgot there was a light meter on the camera. I suppose that’s what happens when you work with simple cameras most of the time. 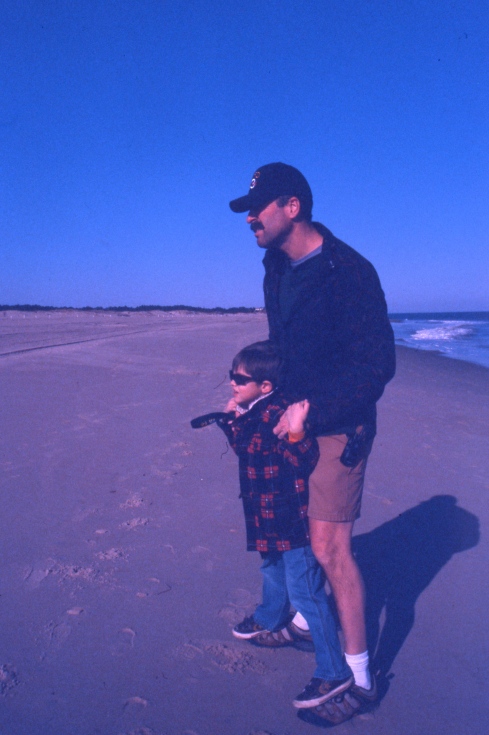 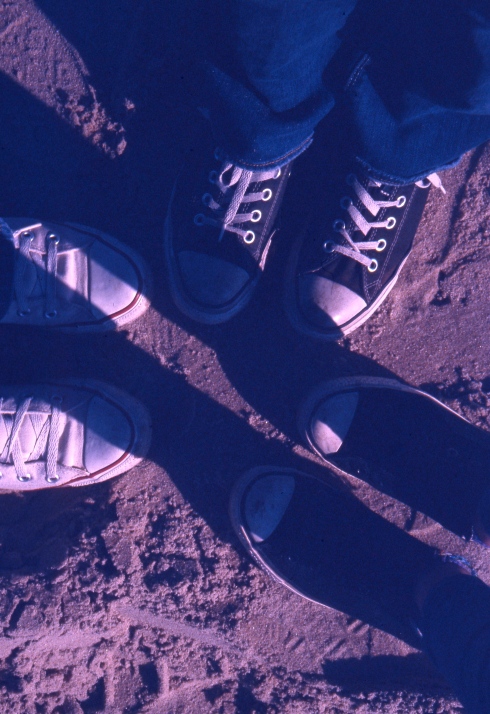 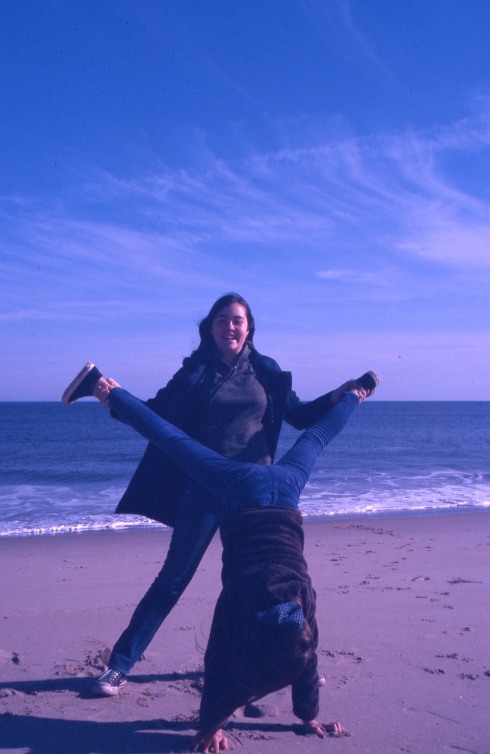 The exposure isn’t the greatest on any of these, plus my film must have been expired, which helps to explain the bluish tint. Look at the first picture again and you’ll see a lovely little element entering the picture from the middle of the top…those lovely sunbursts. I continued to get them in these pictures and really love the way they look. 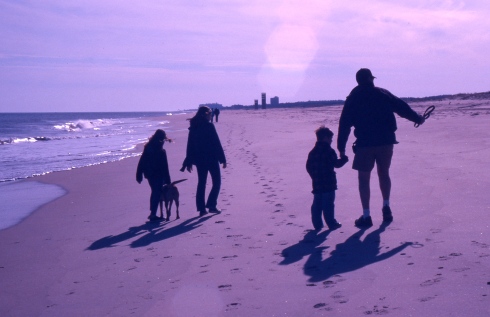 There were a couple of shots which made this roll worth it, namely these two that I took from an odd angle. 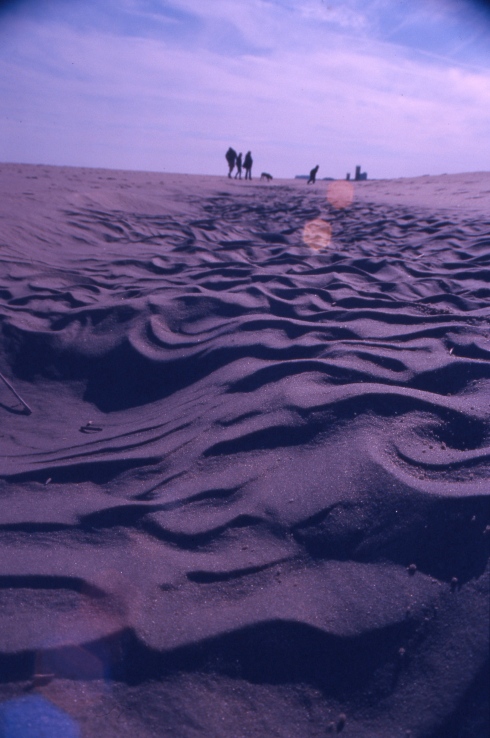 Clearly what went wrong here was my exposure time. In almost every shot, I completely forgot about light metering. Slide film always needs a little more light and the slow speed of the film I was using didn’t help. On the positive side, I love the sunbursts and the unusual POV I took in the last few shots.

So you see, just because you think a roll is a disaster, you may be mistaken. It’s always important to learn from your mistakes, in photography and in real life, and appreciate the beauty that was actually captured.