My husband would SO disapprove.

Let me explain. He is a firefighter. We faithfully change our smoke detector’s batteries twice a year and don’t even have candles in our house because of the fire danger. In fact, we were at a friend’s house one year for a Christmas party and she had LOTS of lit candles around her apartment. He tried to ‘covertly’ blow every last one of them out. Needless to say, she caught him and the story lives as an illustration of how safety-conscious my husband is.

How the heck does this relate to film? Having recently acquired the coveted SX-70 camera and TZ-Artistic film from the Impossible Project folks, I decided it was time to dive into manipulation head-on. Where else does one go for instruction? Why, You Tube and Flickr, of course.

I found this handy video that explained the basics of film manipulation but was still not feeling confident enough to try it myself. Needing more inspiration, I searched Flickr for SX-70 film manipulation groups. The artwork I found was amazing. What one can do with an instant photograph is amazing. There were photos that looked as if they were watercolor paintings and impressionistic masterpieces, photos that looked as if they’d been unearthed from a time capsule from 1970 and some that were whimsical with lines, squiggles and shapes added to otherwise blank areas in the photograph. The possibilities were endless and I was inspired. Some photographers gave detailed explanations of their manipulation processes, which was very helpful. A few described heating the photo to increase the time the emulsion could be manipulated. Sounds fun, right?

My first photo is my absolute favorite. A simple shot of some flowers on a blue table taken from above. I used a Q-tip to push the emulsion around a bit but wasn’t quite satisfied. I took the grill lighter and held it beneath the picture and found that I got these neat bubbles which created interesting snowflake-shaped patterns. I could also squish the bubbles for a more intense look. This got me thinking–what would it look like if I peeled off the white border? I’d seen some photos with the border removed and they were really gorgeous. After deconstructing my photo, this was the finished project

I love the distressed and aged look I got with this one!!

My second attempt was an indoor shot of a palmy plant. I wanted to try to mimic some paintings that I’d seen where a grid is very lightly painted over the entire picture, rendering a really interesting texture to the piece but at the same time, not distracting from the subject. I messed around with this one and heated it up a little and this was the result 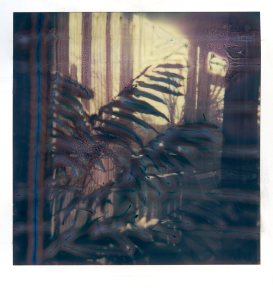 Not quite as spectacular as the first one but still kind of interesting.

This shot seemed a bit dark so for the last picture I went outside in the late afternoon light and snapped a shot of a red hummingbird feeder. While it was still developing I traced the outline of the trees with a pencil and traced around some of the details of the feeder. All that was lost when I held the flame beneath it and it bubbled out. No worries, it was still pretty interesting looking.

I much prefer the first picture to the other two and I’ll be mimicking those results pretty closely.  What I love most about the whole process is the uncertainty of the results. Since I’m so new to the technique my results are even more uneven, making for some crazy results. Look for more SX-70 manipulation really soon and if you have any helpful hints, please leave them here in the comments section.

Oh, and I didn’t set myself or any parts of my house aflame. Thank goodness!

If you’re a fan of instant photography you owe it to yourself to check out The Impossible Project, a group dedicated to bringing back instant film for your favorite vintage Polaroid cameras. As they put it on their website:

“The Impossible mission is NOT to re-build Polaroid Integral film but (with the help of strategic partners) to develop a new product with new characteristics, consisting of new optimised components, produced with a streamlined modern setup. An innovative and fresh analog material, sold under a new brand name that perfectly will match the global re-positioning of Integral Films.”

I checked out their shop last week and found some SX-70 film for a decent price so I had to get some. After purchasing an SX-70 (the cool, retro white one with the rainbow stripe) camera on eBay for around $15 (I can’t believe how much people will pay for these. I’ve seen them in the $150 range!!!) I was ready to go.

I shot the first roll today, some shots inside and some outdoors on a beautiful, sunny, warm early spring day. I didn’t do any manipulation (gotta do some research on it before I figure out what I’m doing) but I am astounded by the results. This film is really, ultra-cool. The first four shots I took indoors in dim light. The subjects of the pictures  are pretty unremarkable but the crazy colors are wild. 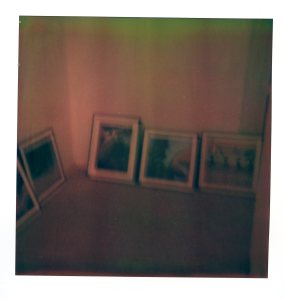 The shots from outside have a streaky painting-like quality about them. I tried to keep the pictures as flat as I could while they were developing. Even still, there are some rather nice streaks going on in the blue, blue sky. I’m hooked. I don’t think I’ll ever want to use ‘regular’ instant film again! 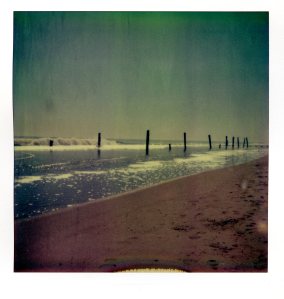 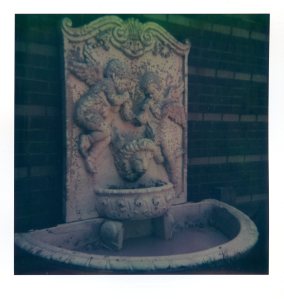 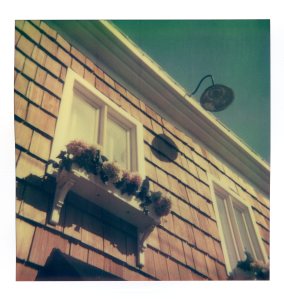 I’m a DIY kind of gal, especially when it comes to cameras. I like to experiment and modify my cameras to suit my needs. Sometimes I’m able to fabricate some pretty cool things but other times I waste a lot of time and energy and usually injure my hands in the process. That’s when I decide to make a U-turn and go in another direction.

Experiment #1: I’ve spent quite a few hours trying to modify my Brownie Bull’s Eye camera to accommodate just ONE spool of 120 film. I used the Dremel tool to sand down bits of metal on the camera body and innards. Sparks and dust were flying and I scraped one of my fingers pretty badly. I was able to fit a full 120 reel on one side and a 620 reel in the take-up spot after all this surgery but my film was pulled so taut that the paper backing ripped.

Experiment #2: Recently I acquired a camera I’d been trying to find for about a year, the dinner-mint-green Mark II Savoy. It also takes 620 film and I tried in vain to fit 120 in it. Again, I used the empty 620 reel as a take up but even then, I could barely get the camera back on.  My husband ended up getting it all back together but the film wouldn’t advance more than a few inches. It’s finally becoming clear to me that some 620 cameras really will only take 620 film (I never said I caught on quickly).

Figuring I’m going to have to start a mass re-spooling of 120 onto 620 reels, I begin to search eBay for empty 620 reels and 620 film only to find them for sale at highway-robbery type prices. While I was searching I came across some brand new, unexpired 620 for sale. Too good to be true you say? Hardly.

Go to B&H Photo.com and you’ll find a modest selection of the stuff, including some Fuji Velvia. Best of all, the prices are comparable to 120 so I’m thinking this is the end of re-spooling 120 film onto 620 reels for me. Thank you B&H Photo!