Photography in the Snow

Last week I told you about my experiences in the fog. It was very educational taking my toy cameras out in the foul weather and trying to make decent pictures  so this week, when we got a rare snowstorm, I decided to try another foul weather photography session.

This time I brought my Polaroid Land Camera 220 and my Fed 2 out to play. I still used black and white film in both cameras (the Fed 2 still had the roll from the previous foggy weather session) as it’s a very pleasing medium for rough weather and uncertain exposure times.  Plus,  it’s hard enough getting the blacks and whites right let alone trying to get the colors in balance.

There were large, wet snowflakes coming down at a pretty good clip when I took my toys out to play. My Land Cam has no numerical controls for the aperture, instead there is a switch that lets you change the Lightness and Darkness of the picture to varying degrees. You can set the film speed on the Land Cam but they are odd film speeds that must’ve been common back in the 1960’s. The closest corresponding number was 75 (my Fuji film was 100 iso). I sort of liked the idea of the nebulous “lighter” and “darker” switches but in actual practice, it was a pain. Again I was plagued with balancing the very light snowy areas with the dark colors of evergreen foliage, bare tree branches and the dark wood on the side of my house.

I started my experiment in the usual way taking the first shot with the light/dark switch right in the middle. As you can imagine it was horribly dark, although not nearly as bad looking as my Holgaroid shots. 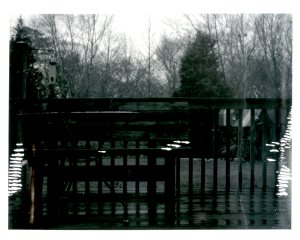 I fiddled with the switch for a few shots and eventually got some nicely exposed photographs of my snowy backyard.

Still a bit dark, but better. Details of the birdhouse are visible, but no snowflakes.

I tried to shoot the falling snow against the dark background of this dark evergreen but still had no success.

The one thing I wanted to capture but wasn’t able to was the image of the snow falling. I just couldn’t get the large snowflakes to show up in the picture. It was a bit frustrating and I suppose, has to do with the limits of the camera. 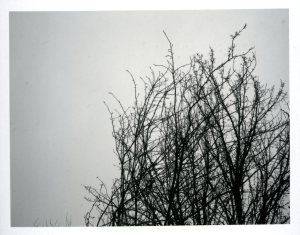 Not wanting to waste anymore film I decided to stop trying to capture the falling snow and concentrate on shapes, like this bare tree. 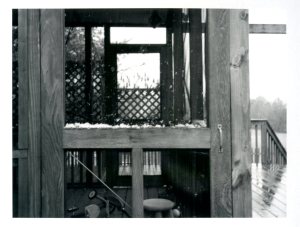 Last Polaroid shot of the day was the white snow on the dark wood of my back porch door.

I’m hoping to have better results with the Fed 2 film as I used my light meter to get the correct exposure time, then bracketed a few shots. I finally finished that roll on this snowy day so as soon as I pull them from the developer I’ll post my results.

This winter has been dreadful for shooting with toy cameras.  Whenever I have off work and am child-free (two things that don’t happen very often) I try to go on a photo excursion. Lots of times I end up bringing the kids with me but it really tries my patience. Anyways,  it seems whenever I have the chance to go on a child-free excursion the weather is either way too cold or rainy and crappy. I think winter is ‘rainy season’ around here. I’m not kidding. It has been atrocious!! So last week I decided, screw it, I’m going out anyways!

Foul weather photography poses not only physical challenges but, as you can imagine, technical ones, especially when shooting with toy cameras. For my first trip out I brought along my Holgaroid and my Fed 2 as well as my trusty light meter. I loaded up both cameras with black and white film and set out to record my little seaside town on a foggy, gray day. Obviously I had more control with the Fed 2 since it has shutter speed and f-stop controls, but I was still guessing at exposure times, since there are only 5 choices of shutter speed. I haven’t yet gotten the results back from that roll as I just finished it up today. More on that in another post.

The Holgaroid was a real challenge. I had 1 pack of Fuji 100-iso black and white to use and I knew they’d be underexposed but I tried a shot or two on regular setting and as expected, the photos were almost completely dark. It was tough getting the black and white balance between the dark plants and trees versus the lighter gray of the sky. I figured I might have better luck holding open the shutter for 3 or 4 seconds on bulb setting.

Unfortunately 4 seconds was too much and resulted in some better, but terribly overexposed shots. Towards the end of the trip I finally got the hang of it. By snapping the shutter for one long second I was able to get a couple relatively decent shots. The biggest challenge for me was keeping track of the developing time for one picture while trying to take another. I really need to bring along a stop watch when using instant film.

One of the first shots that came out halfway decently. Even though it’s underexposed I think it still works. I really like the subject and can’t wait to see how the 35mm shots of this come out.  It’s an old lamp post on an old wooden footbridge in the marsh. 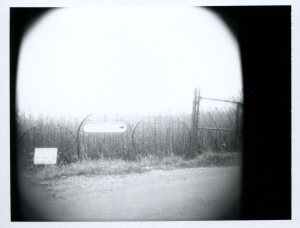 This is a little overexposed but I think it still works. There’s some good peeling paint on the sign that got blown out but I’ll go back and check it out another day. 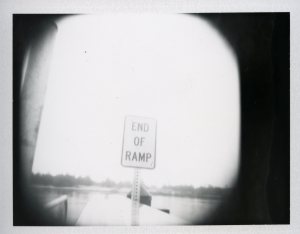 This made me laugh. I guess it’s so boater don’t go all the way down into the water at the boat ramp, but it seems so obvious to me that the ‘End of the Ramp’ is at the end of the dock. Again, overexposed but it gives an old, surreal look that I’m happy with.

This is literally the last shot I snapped before getting soaked when it started raining. I was down at the beach and was really loving the way the seagulls were hanging around the benches.  The fog had obscured a lot of the beach beyond the fences and was very mysterious-looking.  You can bet me and my toy cameras will be back the next foggy morning to get that shot.

My foul weather shoot was an educational experience if nothing else and was cut short when, about an hour into my shooting, the sky just opened up and soaked the town for the rest of the afternoon. Go figure.

2 Comments | posted in My Adventures

I haven’t been taking many photos lately,  probably due to all the holiday hubbub and stress. Now that I don’t have to visit 5 people in the space of 2 days in addition to the crazy work schedules of both me and my husband, I think I can blog again. Thank goodness.

I did get some new toys over the holiday season. My birthday is awfully close to Christmas so I tend to get all my fun presents bundled at the end of the year. For my birthday I got an iPhone. I love it! It’s wonderful not to have to carry a PDA and cell phone separately, which is one of the reasons I wanted one. An unexpected treat has been the built-in, goofy little 2 mega pixel camera.

In previous devices I’ve found that phone and PDA cameras have generally been pretty worthless, especially in low light. Not so with the iPhone. I decided to try it out inside at the Air Mobility Command Museum located on Dover AFB.  Located inside a large hangar the light is pretty poor. I’ve taken my lo-fi cams there once or twice and gotten bad results without flash. Just goofing around, I started taking some pictures of the kids. It works surprisingly well. It adjusts to the low-light situation and doesn’t take forever to take the shot, so there is hope that your subject might be able to stay still enough for a decent picture.

In addition, there are a great many apps available for the camera. I’ve downloaded Steady Cam, which works pretty well to keep your shot still and Toy Camera, which gives your shots toy-like effects. You can’t control which pics get which effects so you just have to take what you get. My favorite app is Camera Bag, which allows you to choose which toy/vintage camera effect to apply to a picture you’ve just taken, or to one already stored on your phone. You get to choose between 9 filters, including Helga, Lolo and Instant.

I know, I know. It’s digital! It’s NOT lo-fi and using those stupid programs to make your pictures look lo-fi is cheating. I completely agree however, check out this little digicam’s shots. They are low-res, low-tech and completely unsuitable for enlarging or using in any real meaningful manner. They’re not the crazy crisp shots that your DSLR or even a good point-and-shoot could give you. For personal use and screwing around, it’s just plain fun.

Next time I’ll talk about the other fun toy I got over the holidays. A big, fat Kiev 88 medium format film camera….